With football one can only be a winner: the joy of playing, technique, friends, excitement, fairness.The SV Askania Coepenick offers all that and a lot more to children and young people in the Wuhlheide.

At Askania Coepenick everything revolves around football, although the non-profit sports club is in principle open to other sports. It currently has 310 members who are active in training and playing. The possibility to train and play is open to children from the age of four and extends to the senior sector, which appeals to members over the age of 40. Although the youth section is the most popular, there are also men’s, women’s and Seniors teams in the club. The highlights of club life are the competitions in the league system of the Berlin Football Association (Berliner Fußballverband), in which Askania Coepenick participates with 16 teams. They are broken down into Juniors (m/f/d) U7 to U19, Seniors from U18 and Seniors Women from U16.
In the junior teams of Askania, all sports-enthusiastic children and young people from the age of 7 can participate, if they are interested in football, have a physical coordination ability according to their age and have the necessary understanding to learn the sport. The coaches decide whether these skills are sufficient in the context of team strength after a four-week, free trial membership.
The trainers and coaches of the club are very committed to the cause. In addition to regular training camps, they also organise extra-sports activities that are fun and strengthen the sense of belonging for the children and young people. These can be shared cinema experiences or visits to the children’s favourite TV shows. The young footballers are particularly thrilled when they get the opportunity to play with the 1. FC Union Berlin on the pitch.
It is easy to become a member. You can contact the trainers directly on the homepage or declare your wish to register here. In the second case, the athletic management of the club will contact you and connect you or your child with the right coach, who will discuss all other details with you.

Celebrating together is a tradition at SV Askania Coepenick. Every year, the club organises a celebration at the opening of the season and a summer festival. Between these two festivities the Pentecost tournament takes place. All club members as well as the guest teams can participate in the sporting part of the events. In addition, a Football Plus offer with bouncy castle, tombola, karting, treats from the barbeque and drinks awaits you, which is also open to all visitors to the park.
In winter, various indoor tournaments take place.

On the history of the place: What used to be on the present site of Askania Coepenick? Please follow up!

The SG Oberspree, was founded in 1913 which is already reflected in the name, was a Köpenicker club. After the Second World War, it was renamed Oberspree and then BSG Oberspree. After German reunification, it reverted back to its traditional name. The club never got beyond the District League, but at the Spartakiade in 1972 the then A-Youth team created a sensation: they played themselves up to 1st place and even left the 1st FC Union behind. Ronny Teuber, who then played for Union and subsequently played countless East German Major League games and international matches, was in goal.
The roots of FC Karlshorst, founded in 1995, lie in Lichtenberg. During the merger talks between the two clubs, of course the question of a new name was raised. Since the venue in the Wuhlheide belongs to Köpenick, the first name component was found quickly. The old spelling Coepenick is a reference to the long tradition of the SG Oberspree 1913. In order to stand out from other Köpenick clubs, they looked for an addition to their name and found it in history.
The area of ​​today’s Köpenick was settled by Slavs from the 8th century to the middle of the 12th century. The Askanians, a German noble family, played a large role in the German settlement of the Slavic territory under Albrecht the Bear and founded the Mark Brandenburg. The decisive battle took place in 1157. Coincidentally, this number was once the postcode of Karlshorst. The name Askania Coepenick was invented in 1913 – a cross-section of the history of SG Oberspree and the local tradition of FC Karlshorst. 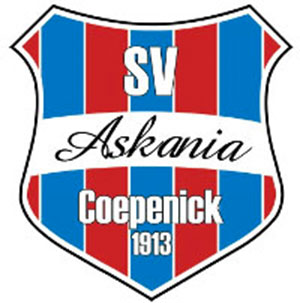