Back the right horse at the races at the Trotting Track Karlshorst. With only two euros you are in.

Horse racing has a long tradition in the Wuhlheide. To this day, exciting trotting races take place here all year round – a fascinating experience for horse lovers of all ages. You can join in the excitement from as little as one euro. Main race days are Fridays and Sundays. There are also special family race days with a colourful supporting programme for children.
The Karlshorst Equestrian Centre is also a worthwhile excursion destination regardless of the race days. If you would like to take the reins yourself, you can practice sulky driving at the Trotting School. Great children’s birthdays can also be celebrated on the racecourse. Cocoa, cakes, horseshoe throwing and, of course, riding are included on these occasions.
At the Karlshorst Equestrian Centre, you can even become a horse owner yourself for a small investment by buying shares in racehorses.

The large, open area of the Equestrian Centre also provides the perfect backdrop for folk festivals and parties. Every year, for example, the German-Russian Festival takes place here. A sporting highlight was the World Championship of Icelandic Horses, which was held on the grounds for the second time in 2019. Up-to-date information can be found in the event schedule on the website of the Equestrian Centre Berlin Karlshorst.

In 1883, the Charlottenburg “Steeplechase Association” (” Verein für Hindernis‐Rennen “) of Sigismund von Treskow acquired about 300 acres of land in Karlshorst in order to build a steeplechase course here. It was opened in 1884 and soon became the most famous steeplechase course in Europe. The race days were social events that were also about seeing and being seen.
After the Second World War, the Soviet City Commander Bersarin had the structure converted into a trotting track and on this occasion expanded it by almost double in area. In GDR times it was operated by the state-owned company Trotting Studs and Trotting Course (VEB “Trabergestüte und Trabrennbahn”).
At the time of reunification, the trotting track was already past its best. In order to preserve the ailing complex, part of the site was sold, and some stable buildings, the casino and the riding hall were demolished. Nearly 4 square kilometres of land remain. These are now managed by the Equestrian Centre Berlin Karlshorst. It is thanks to them that the number of visitors and betting turnover has risen again and that sponsors have been found. In 2016, they also sold a section of about 100,000 square metres, which had previously been lying idle, to the Rehabilitation Centre Berlin East Foundation (Stiftung Rehabilitationszentrum Berlin-Ost), which has built the largest Equestrian Sport and Riding Therapy Centre in Germany. 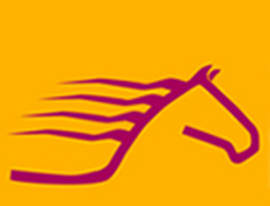